Leaving the blog world for a whole week after the previous post was not my intention . What happened was that WordPress ever so kindly kept me from logging into my account on several days. This has happened before and I’m still no wiser about the reasons so if any of you are, please let me know. It simultaneously happened with my Gmail account which was extra annoying. Though while not fun, it obviously is a first world problem and didn’t keep me from living my life.

Okay, onto some of the happenings from and a few thoughts on the past week. Thanks to Meg for hosting this fun little party to start the week on a good note.

During the past week I …

Worked. Same old, same old. It was a somewhat busy week which is a positive in my book. There’s nothing worse – again: first world problem – than waiting for time to pass until you can leave during the less busy weeks.

Mailed a little birthday package to a very good friend living way too far away. As much as I like surprising others, I have a hard time finding a gift that feels just right. Useful but surprising. My sister – not completely without ulterior motives 😉 – suggested one of her undies so that’s what I got. The birthday girl was really happy with her new donut undies. FYI: This post is not sponsored by my sister  – I bought  the undies from my own money ;).

Spent time with the cutest little fellow in my world [aka: my nephew], my sister and my parents. I’ve seen them – my sister and P. – less often and miss having them around. It’s fascinating how fast P. is developing now – not just in terms of growth or vocabulary but in character. Being honest here, he’s sweet but definitely a little wild thing and hyperactive at times. Still cute. Plus, he’s calling me by my “pet name” now and has those adorable snuggly moments so it all balances out. Can’t he stay little forever, please?!

Met up with the aforementioned friend for another cooking date. It might unfortunately be our final one for this year with the holidays and lots of invitations coming up. Sad because the afternoons at her house are the epitome of nourishing for me. Cora wrote a post about this that really resonated with me. What makes a meal or a moment in life nourishing isn’t necessarily or at least not solely about the food. Yes, some foods do feel more nourishing than others. But how far does that go if we’re not feeling nourished wholly? The meal with my friend was just that through the setting – I really like her kitchen: lots of light, a few decorations and an overall cozy feeling -, the company and, yes, also the food. Feeling full but not uncomfortably, taking time to eat and having a deep conversation. Oh and since I figure you might wonder: we tried Dana’s Lentil Eggplant Lasagna. Repeat offender …What can I say? There are a million blogs but I simply trust her recipes and have so many I want to try. It’s actually funny I chose the lasagna because I neither like eggplants nor tofu much but the reviews were incredibly positive and it fit my criteria of offering enough tasks for two people. The verdict? So good! The sauce is super simple but flavourful [I didn’t use store bought marinara but a bottle of unseasoned tomato sauce, adding talian herb seasoning], the tofu ricotta actually delicious on its own already and the eggplant? Oh well. I thought it was cut into too thick slices as per the recipe. My friend would have liked more of a spicy kick – as did my mum and sister who got to try some leftovers – but enjoyed it. Her husband missed the meat [and I didn’t expect anything else to be honest]. You can’t please everyone even with dishes that got rave reviews on the blog. I actually took a few pictures this time but they didn’t turn out so I’ll use one of Dana’s here. I highly recommend you give it a try. 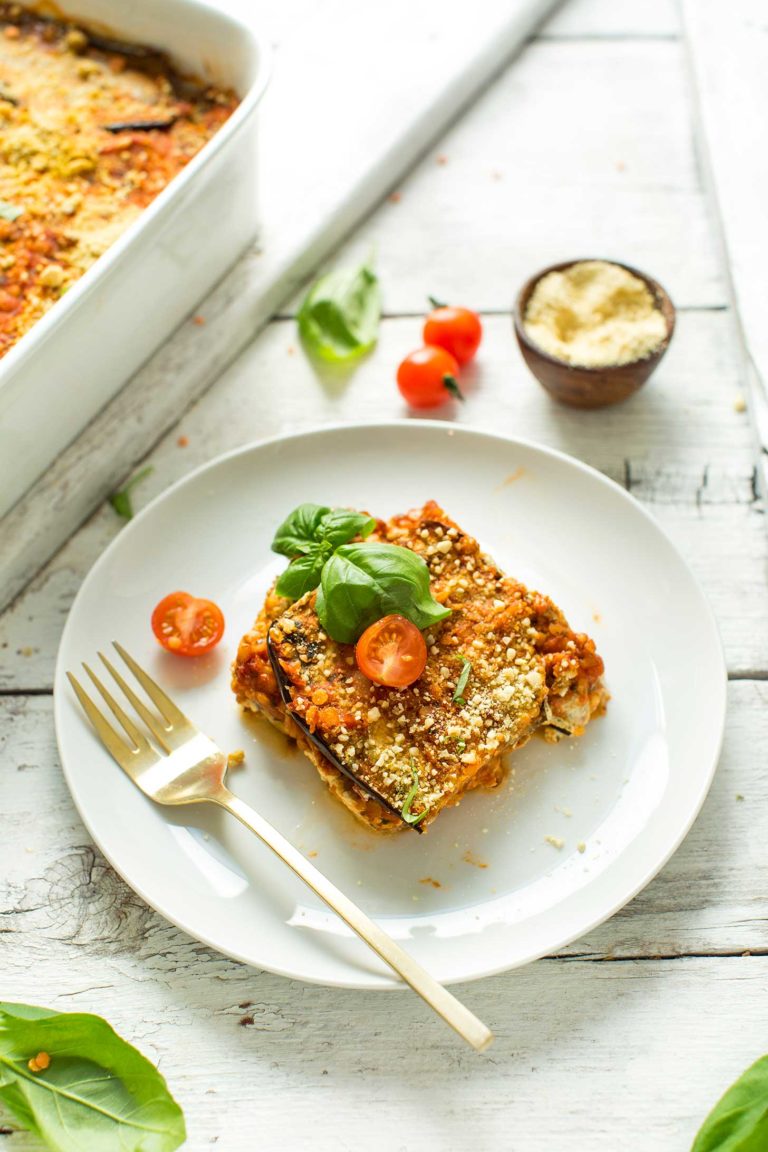 Had dinner with my parents, sister and P on Saturday night. Since I liked the lasagna so much, I made it again and can now say it’s definitely way faster to assemble the second time around. Slicing the eggplant into thinner rounds this time really made me enjoy it even more. It was only me eating this – the remainder of the family had Serviettenknödel [containing eggs so not for me] with mushroom cream sauce – but it was sharing a meal and time spent together that mattered. Yet another nourishing moment in my week.

Went on a walk with my mum on Sunday afternoon. She suggested it after we’d waved goodbye to my sister and P. I’m glad we did despite the frigid temperatures because our conversation and getting a good dose of fresh air was just what I needed as a finishing touch to the week. It wasn’t the happiest week for me but I’m always trying to shift my focus on the silver linings and try to be forgiving [of myself and others].

Despte what it might look like from the things listed above, the past week was rough. Tears, a hard time sleeping most nights because my brain wouldn’t calm down,  an uncomfortable appointment and body image struggles – all of these were part of it, too. And just so it doesn’t seem like it: I’m not saying any of these asking for sympathies but because I want to be honest. A lot of bloggers [choose to] portray only the good moments of life and if that’s what feels right for them that’s totally fine.  It’s just not for me [I also can’t lie when people in real life ask how I am and I definitely wish I could at times].  But I’m obviously also a big believer in seeing the silver linings in even the ickiest of weeks. And with all of that, I wish you a …

Happiness-inducing today: Family time. That’s not to say we were always getting along but it’s the overall happiness that’s on my mind still right now.

Stay in touch!
Twitter: @MissPolkadot21
Pinterest: MissPolkadot21
Bloglovin’: Let’s get living
Tell me some achievements from your past week!

Have you tried any new [blogger] recipes lately? Which ones?

15 thoughts on “Thoughts on nourishment and finding silver linings”